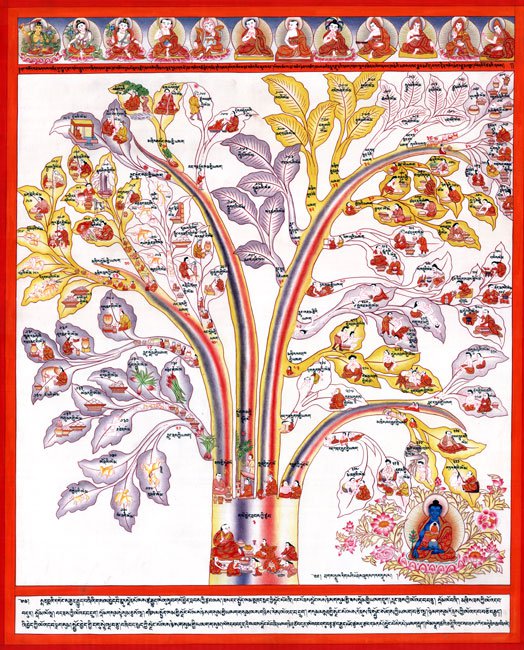 This Medicine Thangka is the last or the 3rd one of 3 sets of Blue Beryl Tree paintings. It is depicting a tree-like summary of all aspects of medical education.

The Four Tantras, the ornament of Bhaisajyaguru’s aim, are explained in the Blue Beryl treatise: Painting Two depicts the emanation of the Root Tantra’s expositor, the hermit sage Vidyanana, and its listener, the hermit sage Manasijas, from the buddha-mind and the buddha-speech, respectively. The size of this thangka is 74 x 90 cm and the material used to make this thangka is Natural Stone Colors.

It also depicts chapter three of the root tantra, which deals with the root of natural physical state and the humoural basis of disease pathology, from which the two stems of unaltered physiology and pathological metamorphosis grow.

The first of these stems have three branches, one for the humoural basis of sickness, one for biological elements, and one for contaminants, as well as 25 leaves. The second contains nine branches: primary and secondary causes [of sickness], places of inception, locations, paths, and growing occasions of humor, outcomes [which bring fatality, and the opposite humoural imbalances], and the conclusion. It also has a total of 63 days off. There are 88 leaves in all, as well as two blossoms dubbed “freedom of disease” and “longevity.”

From them, the fruit of spiritual and material well-being, as well as the fruit known as the “liberation of the psycho-physical components of one who has gained” the unsurpassed enlightenment in the body of light, as a result of the attainment of happiness, arise [respectively].